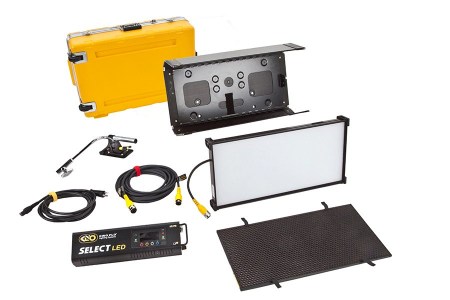 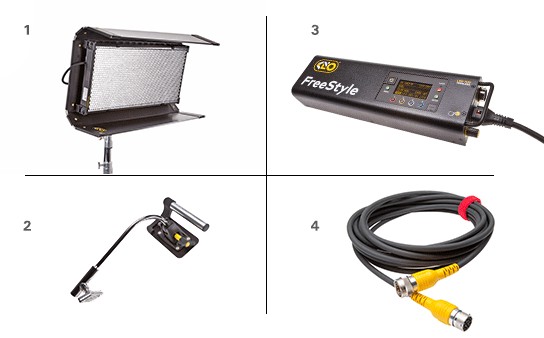 The FreeStyle LED fixture’s lightweight modular design includes built-in barndoors, a removable LED panel and a removable louver. The Louver is held in place with Velcro and can give direction to the light or be removed to give broad coverage over an area. The twist-on removable center mount can mount the fixture easily to a stand. When the mount is removed, the fixture is flat and can be hand-held or screwed to the wall or ceiling through its eyelets. The removable LED panel also has a twist-on mating plate to accept the twist-on mount. The four molded corners offer additional rigging points for rope hanging, for example. With the removable KinoGrip mount, the fixture or LED panel can be hand-held. The FreeStyle 152 LED DMX Controller can also be strapped to the back of the fixture with Velcro or used remotely with an extension cable. 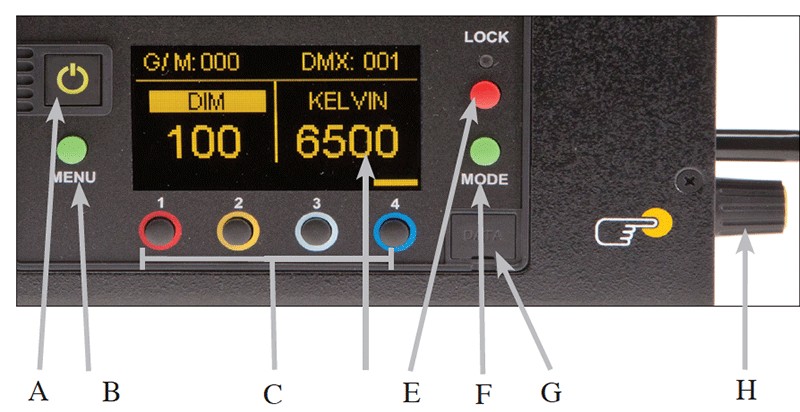 The Tegra 4Bank produces as much light as a 1000W tungsten softlight using only one third the amount of power at 2.8A (120VAC) compared to a tungsten softlight at 8.3A (120VAC).  This is especially important when shooting on location and power availability is an issue.  The low power draw is also an advantage when operating on battery inverter power sources.

With its built-in ballast design, the Tegra 4Bank includes and manual dimming, and manual lamp switching with universal input voltage from 100VAC to 240VAC.  The Tegra 4Bank also comes with a 15ft extension cable with an in-line power switch.  If the fixture needs to be hung out of reach, a hand-held remote control dimmer (DIM-5), sold separately, may be used.  The Tegra incorporates built-in barndoors with newly designed hinges.  The all-in-one, lightweight Tegra makes it ideal for fast and easy set ups.

Lamp life of a fluorescent for the television and motion picture industry is determined more by its lumen maintenance than by its actual burn time.  All fluorescent lamps display a lumen depreciation curve.  This means that over time the light output gradually drops and lowers in color temperature.

True Match® lamps are formulated to correspond to the spectral distribution curves of film and video cameras as well as look correct to the eye.  They are designed to match the colors from quartz units or daylight sources such as HMIs.  This gives the camera operator the option of mixing quartz hard light sources with fluorescent soft sources.  Most lighting designers want the ability to use both qualities of light to enhance the set.

Architectural lamps are designed to optimize government-mandated standards for lumens per watt efficiencies (energy savings targets).
In order to achieve these standards, the lamps contain high levels of light in the green spectrum, which our eyes don’t perceive as inaccurate.  Film and television cameras do record this added green.  For example, green renders Caucasian skin tone as grayish and unattractive.  The architectural lamps do not match with other studio lamps.  They render colors inaccurately and make correction in post almost impossible.

In 1995 Kino Flo received a technical achievement award from the Academy of Motion Picture Arts and Sciences for the development of the first color-correct lamps for film.  Kino Flo continues to be a leader in the industry introducing new developments and constantly improving the efficiencies and formulations of its lamp technology.

For Kino Flo, heat management is a critical design element of fixture design.  The physical heat of the lamp or buildup of heat within the fixture will directly influence the color temperature, lumen performance and lamp life.

A well maintained lamp temperature extends the lumen maintenance, color temperature and life of a lamp.

The Center Mount is more flexible than a conventional yoke.  A yoke limits orientation on two axes, tilt and pan.  The ball center mount design enables the fixture to be oriented at any angle.  An optional offset arm with baby receiver (MTP-B41F) may be used to center the weight of the fixture on a stand or can be under slung and used as an “up” light.

With the push of reducing fossil fuel consumption, TV studios are looking at cooler, more efficient lighting systems to reduce costs and save energy.  One of the most important values is Btu/kWh.

Any light generates a percentage of usable light and the rest in heat.

For example, a standard incandescent light bulb converts only 11 percent of its electrical input into visible light, while the rest is dissipated directly as heat.  There are energy costs involved in cooling the studio environment.  The measure of Btu/kWh is a means of calculating the thermal loads related to operating lighting. 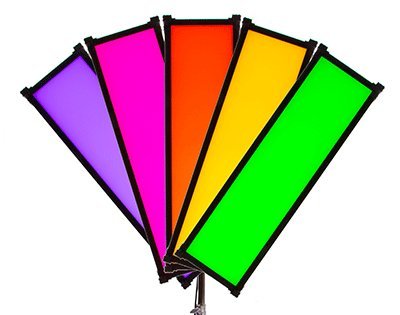 In the first color menu, the Kelvin range is from 2500K tungsten to 9900K daylight with three additional channels, Gel, Hue Angle and Saturation. The Gel channel includes Kino Flo presets such as blue & green screen, sodium vapor, mercury vapor and over 100 well-known lighting gels. The user can also dial in any color through Hue Angle and Saturation.  The second color menu provides individual red, green, blue (RGB) control.  This menu is a great way to work with Apps with predetermined RGB presets or color wheels.